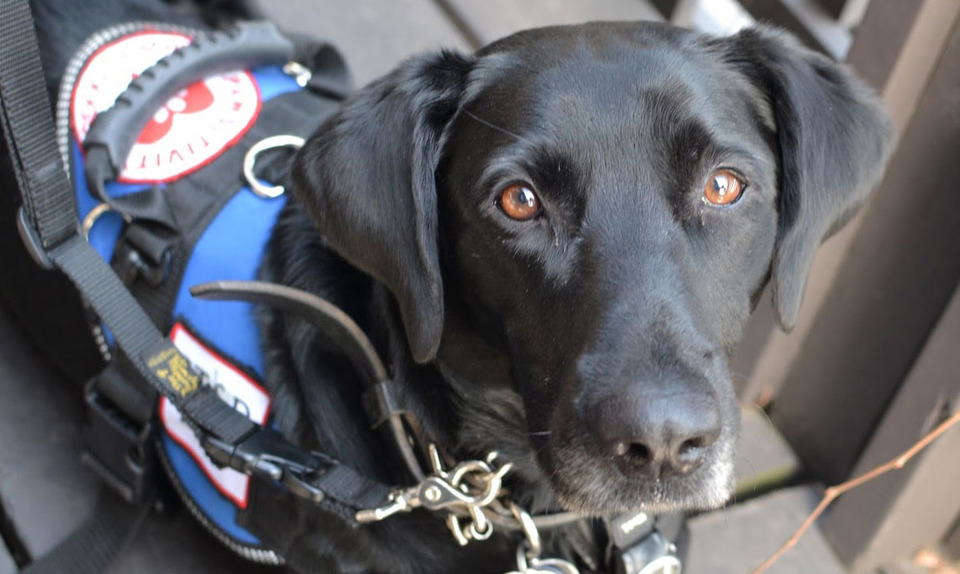 Pawsitivity trains PTSD service dogs for both veterans and non-veterans.

Post-Traumatic Stress Disorder involves an underlying state regulation disorder, which is often hypersensitivity to sound. While further research needs to be done (there is an ongoing government study), service dog intervention is increasingly being recommending by clinicians in addition to the current treatment plans for people living with this kind of anxiety and fear. A service dog may significantly help with some of the major symptoms and improve overall quality of life. .

A report on PTSD service dogs[1] states "there are many clear advantages to using psychiatric service dogs", and findings from a 2009 survey distributed by the US military reported:

Goals with a PTSD Service Dog

A PTSD service dog is especially helpful when combined with cognitive behavioral therapy from a therapist or psychologist, and it is a therapeutic technique that is repeatedly demonstrated to be legitimate and effective. Applying cognitive-behavioral skills to interactions with a service dog can produce powerful outcomes.

A Service Dog can help:

In addition to aiding with clinical symptoms, these service dogs can help with more general symptoms, such as sadness and loneliness, by initiating walks outside the home, and showing the handler affection. The dogs can:

Studies show that a Service Dog can:

The PTSD brain generates fear and alertness even when there's no actual danger. Dr. Kelly Skelton, a psychiatrist who is overseeing a Veteran's Affairs service dog study at in Atlanta VA, says that the theory is that that service dogs "can serve as a bridge to get them past that initial fear. That way, they can get out more and engage in therapy so they can eventually free themselves of that excessive fear response."

In addition to accompanying the handler outside the home, there are numerous tasks and therapeutic functions that a service dog may be trained to provide. Typically this training focuses on leveraging the dog's natural senses to help the handler interpret the world around them. With PTSD, a person can't always trust their own senses. Relying on a service dog's incredible hearing, smell, and other senses, allows the handler to be reassured that the environment they are currently in is not dangerous.

Because of the dog's increased range of hearing and smell, in conjunction with the relationship between the service dog and its handler, service dogs provide an excellent source of real-time information about potential threats in the environment. For instance, if the handler suddenly goes on high-alert because of a noise at night or upon entering a dark room, they can double-check their responses against that of their service dog. Unless the dog's hackles (neck hair) are up, or the dog is wild-eyed and alerting to danger, the handler can relax and remain calm in an unthreatening situation.  Moreover, as mentioned previously, with PTSD, it's easy to feel alone because of the trauma one has experienced in the past. But with a service dog, the handler is not alone - they can go out in public with their service dog (many children have their dogs with them 90% of the time they are not in school). Having a constant companion provides positive feedback in situations that might otherwise be stressful for those suffering from PTSD. These dogs also reduce the stigma of PTSD; it provides the handler an opportunity to interact with the public in a positive and supportive way.

There are two kids of trigger: trauma-specific and environmental.

A PTSD Service Dog does not prevent trauma-specific triggers.

An example would be a veteran who is triggered by the sound of helicopters, and the dog would not prevent helicopters from coming around.

What a Service Dog does do:

A Service Dog for PTSD can help prevent environmental triggers.

After a symptom occurs, then a Service Dog can help, too. After the handler starts to react to either a trauma-specific trigger (such as the sound of a helicopter) or environmental trigger (such as people getting too close to the handler), the dog can be a calming presence, thus reducing the effect of the triggering.

With continued use of a PTSD Service Dog, the handler can find that their overall stress is reduced.

These reductions in overall stress can lead to:

[2] The Use of Psychiatric Service Dogs in the Treatment of Veterans with PTSD. Craig Love Ph.D., US Army Medical Research and Materiel Command, Fort Detrick, MD, 2009.

[3] The Use of Psychiatric Service Dogs in the Treatment of Veterans with PTSD, Craig Love Ph.D., US Army Medical Research and Materiel Command, Fort Detrick, MD, 2009.

What is your next step?

Note that our application process is closed right now (sorry), but we open up for applications about twice a year.

If you've already read our FAQ (Frequently Asked Questions), we encourage you to sign up to get updates.