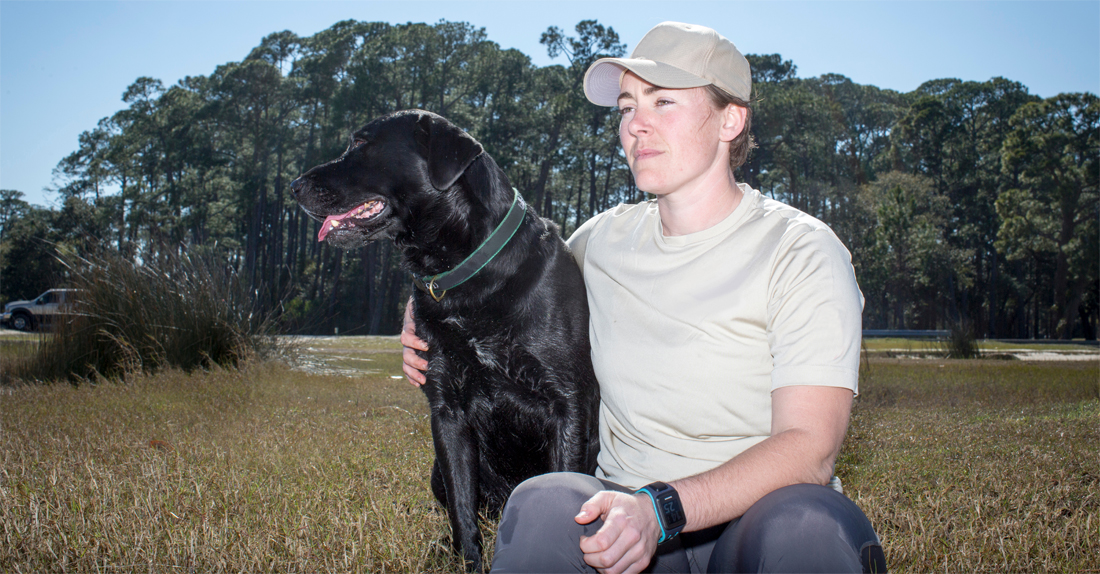 Pawsitivity trains PTSD Service Dogs for both veterans and civilians.

Pawsitivity trains PTSD Service Dogs for both veterans and civilians.

This page shows you exactly how these hero dogs help people with Post-Traumatic Stress Disorder lead independent lives. You may also want to check out our page on Psychiatric Service Dogs.

Triggers
There are two kinds of PTSD triggers: trauma-specific and environmental.
Stress alerting
In a stressful situation, it can be easier to see how a dog is reacting (panting, licking, looking away constantly, and other stress-reduction techniques specific to dogs) and thus the handler can realize that both the dog and handler need a break. Also, once the dog is fully bonded to the handler, often the dog will pick up on the handler's stress levels and alert the handler that they are becoming stressed (even before the handler would notice the symptoms in themselves), and in this way, the dog becomes a biofeedback tool. (Also, the dog can be used as an excuse for the handler to remove themselves from the stressful situation.)
Medication reminders.
The dog can be trained for the task of reminding the handler to take their medication, thus keeping all the effects that happen when the handler doesn't take their medication regularly.

After a symptom occurs, then a service dog can help, too.
Beneficial Residual Effects
With continued use of a PTSD Service Dog, the handler can find that their overall stress is reduced. In this new, less-stressed state, the handler is less sensitive to their triggers (both primary and secondary triggers). Also, the handler can get better sleep, which reduces overall stress and leads to a better ability to handle future stress. These reductions in overall stress can lead to:
Residual effects also help with inappropriate emotional responses often associated with PTSD:
A PTSD Service Dog is especially helpful when combined with cognitive behavioral therapy from a therapist or psychologist, and it is a therapeutic technique that is repeatedly demonstrated to be legitimate and effective. The combination of cognitive-behavioral skills with interactions with a service dog can produce powerful outcomes.

The PTSD brain generates fear and alertness even when there's no actual danger. Dr. Kelly Skelton, a psychiatrist who is overseeing a Veteran's Affairs service dog study at in Atlanta VA, says that the theory is that that service dogs "can serve as a bridge to get them past that initial fear. That way, they can get out more and engage in therapy so they can eventually free themselves of that excessive fear response.”
In addition to accompanying the handler outside the home, there are numerous tasks and therapeutic functions that a service dog may be trained to provide. Typically this training focuses on leveraging the dog's natural senses to help the handler interpret the world around them. With PTSD, a person can't always trust their own senses. Relying on a service dog's incredible hearing, smell, and other senses, allows the handler to be reassured that the environment they are currently in is not dangerous.
Hearing:
Smell:
Because of a dog's increased range of hearing and smell, in conjunction with the relationship between the Service Dog and its handler, Service dogs provide an excellent source of real-time information about potential threats in the environment. For instance, if the handler suddenly goes on high-alert because of a noise at night or upon entering a dark room, they can double-check their responses against that of their service dog. Unless the dog's hackles (neck hair) are up, or the dog is wild-eyed and alerting to danger, the handler can relax and remain calm in an unthreatening situation. Moreover, as mentioned previously, with PTSD, it's easy to feel alone because of the trauma one has experienced in the past. But with a service dog, the handler is not alone - they can go out in public with their service dog (many children have their dogs with them 90% of the time they are not in school). Having a constant companion provides positive feedback in situations that might otherwise be stressful for those suffering from PTSD. These dogs also reduce the stigma of PTSD; it provides the handler an opportunity to interact with the public in a positive and supportive way.

Goals with a PTSD Service Dog

In addition to aiding with clinical symptoms, these Service Dogs can help with more general symptoms, such as sadness and loneliness, by initiating walks outside the home, and showing the handler affection. The dogs can:

A report on PTSD service dogs[1] states "there are many clear advantages to using psychiatric service dogs", and findings from a 2009 survey distributed by the US military reported:
Studies show that a Service Dog can:
The first long-term, large-study, study on PTSD Service Dogs that uses randomized controls is now underway, but “The overwhelming majority of published studies have reported that animals make excellent therapists.”
-Source: Psychology Today blog by Dr. Hal Herzog, November 2014, “Does Animal-Assisted Therapy Really Work?”
Brain scans helped “to convince skeptics that PTSD is an organic disorder rather than neurotic malingering... it required precisely this to ‘prove’ to many that PTSD was an organic brain disorder.”
- Excerpt from Behave: The Biology of Humans at Our Best and Worst, Robert M. Sapolsky, 2017

More info about what a PTSD Service Dog does can be found on our page about Psychiatric Service Dogs.