Wonderful article on Marissa and the fundraiser in her memory

From the Elk River Star News: 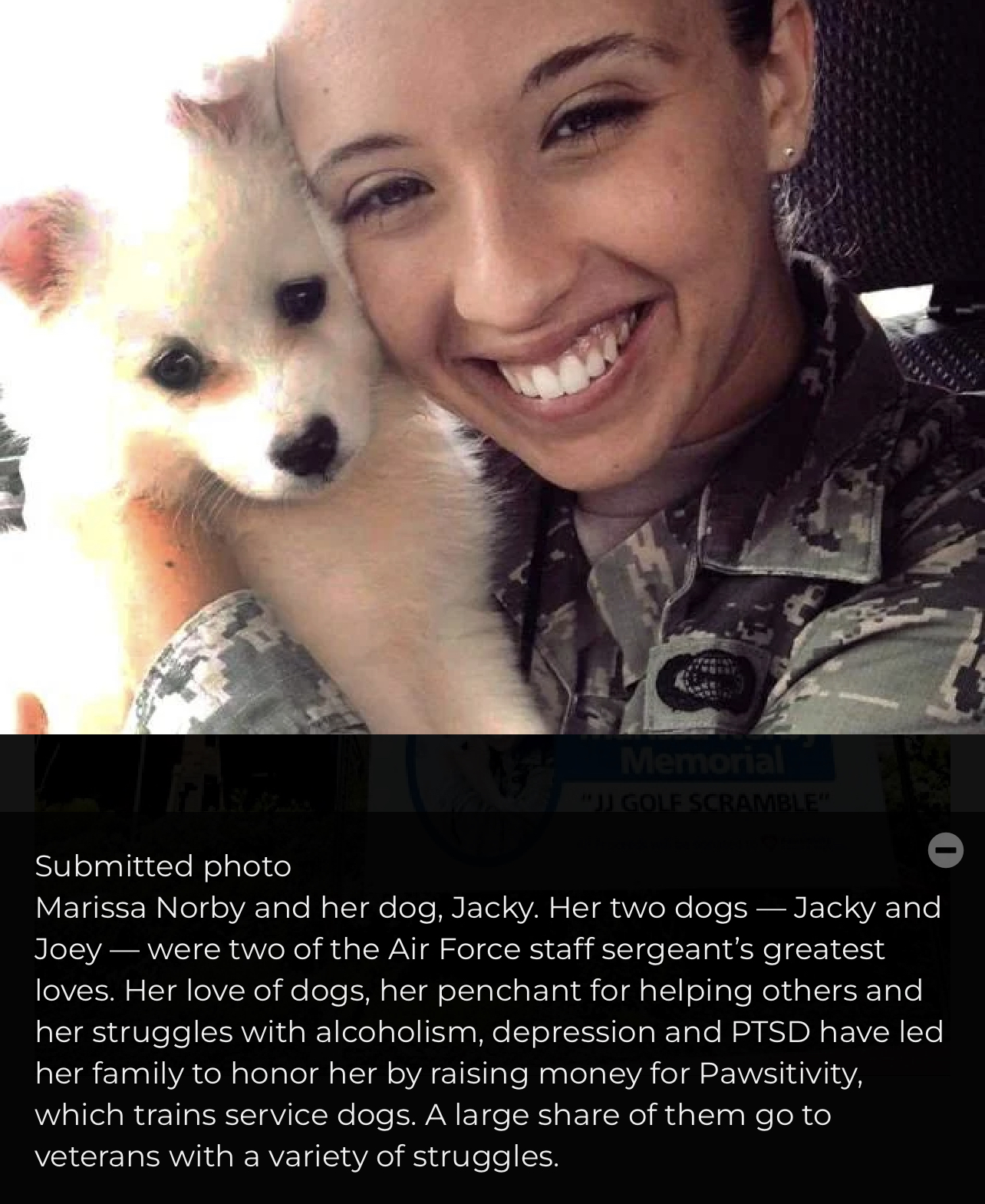 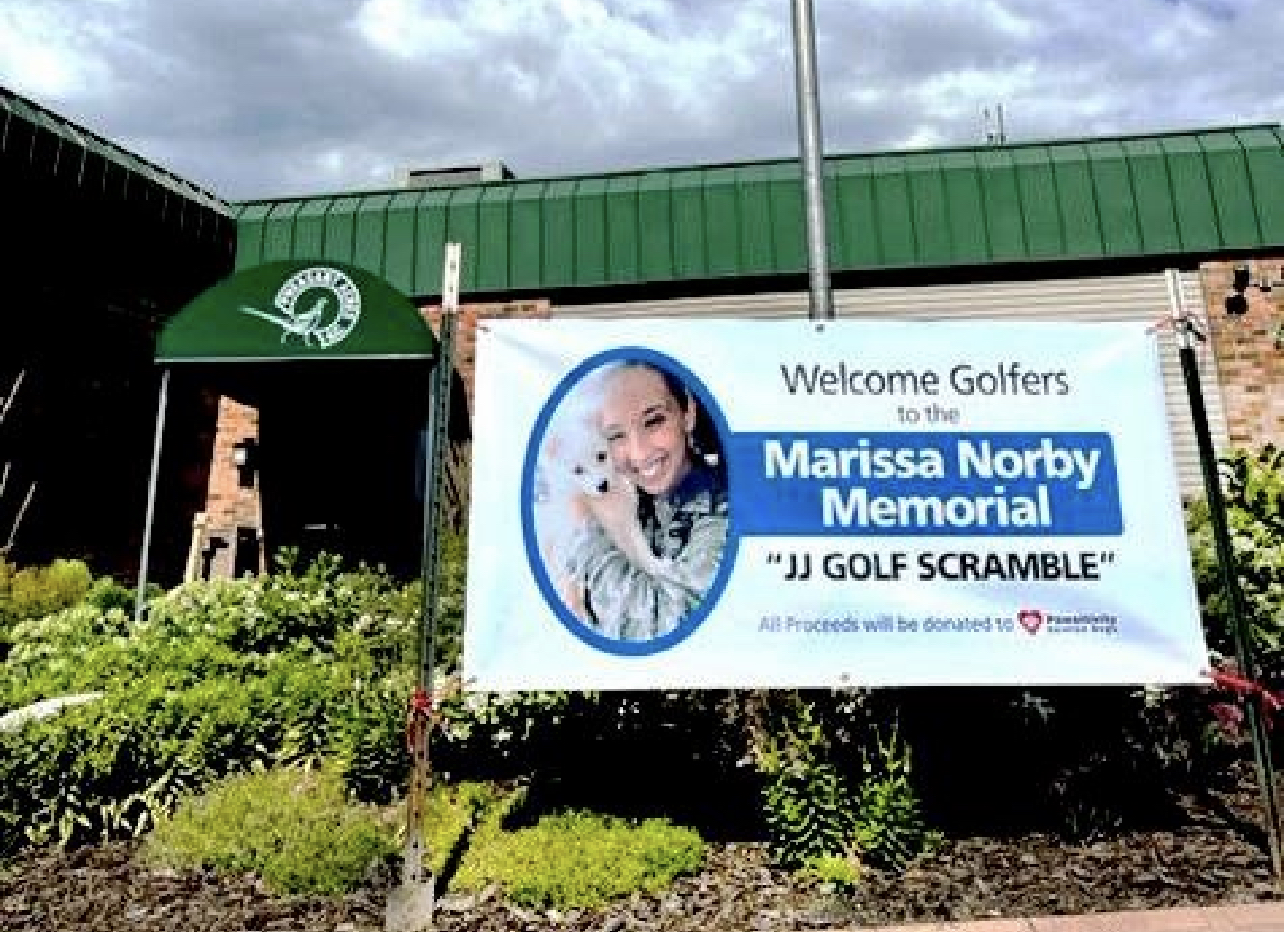 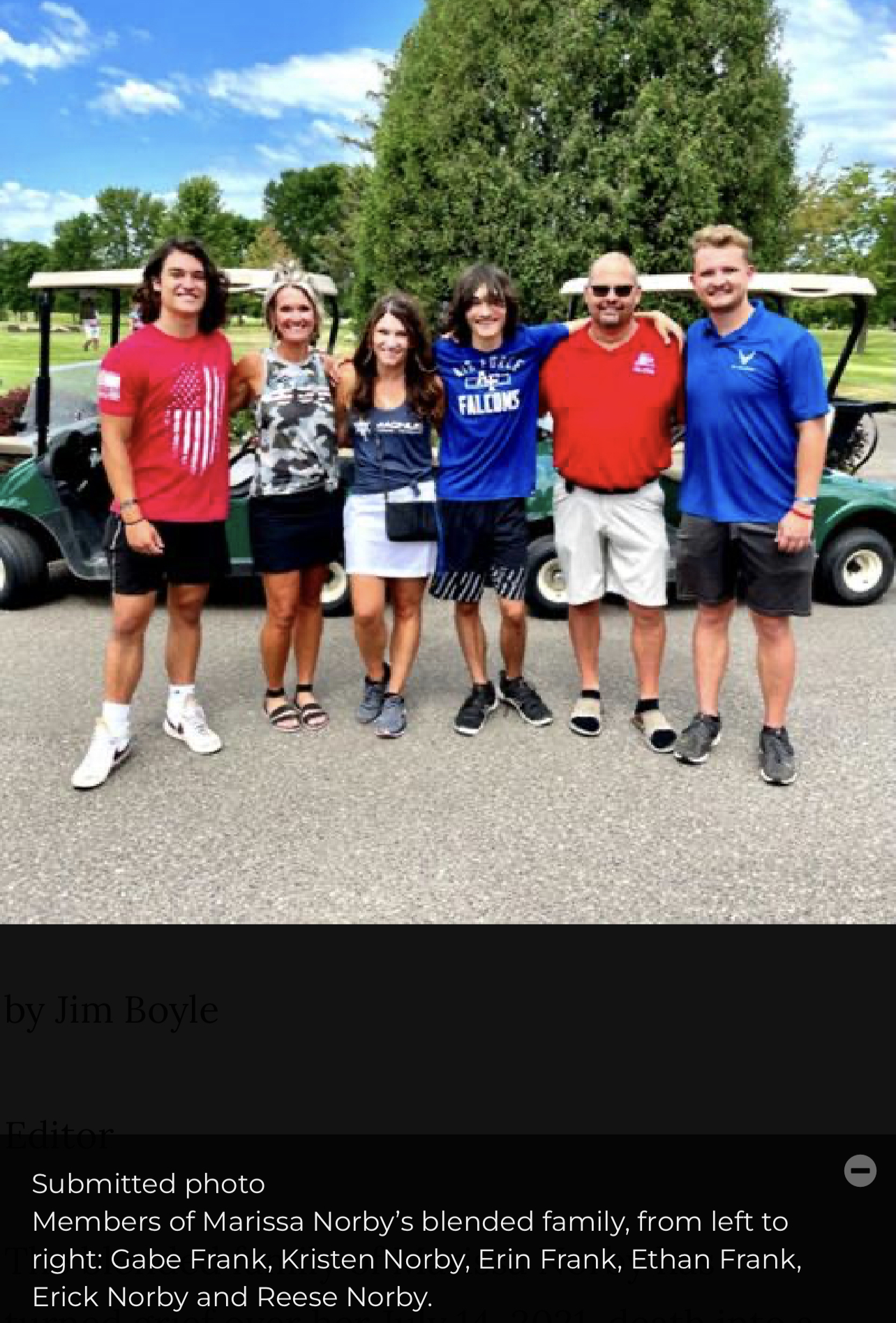 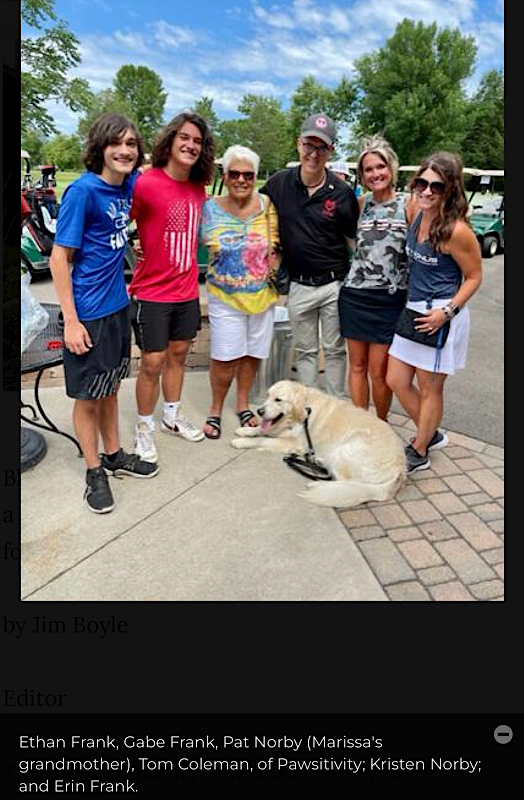 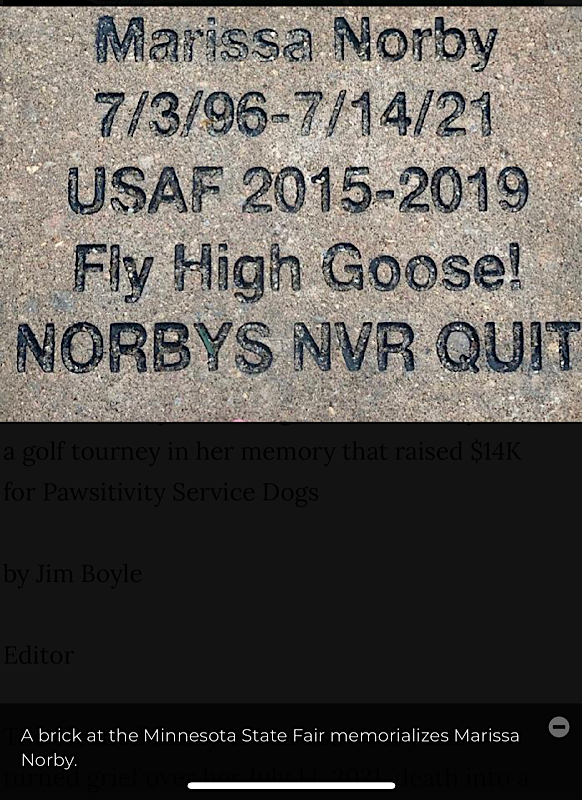 The blended family of Marissa Norby has turned grief over her July 14, 2021, death into a mission to honor her.

To do it, they have tapped into one of the former Air Force staff sergeant select’s greatest loves: her two dogs, Jacky and Joey.

They have acknowledged her greatest struggles were with PTSD, alcoholism and depression.

And they have figured out a way to help service members who may need somewhere to turn for help when their own personal struggles mount.

Based on the success of the Marissa Norby Memorial Golf Scramble on July 22, friends and the community have rallied behind them. They raised more than $14,000 for Pawsitivity Service Dogs, a nonprofit organization in St. Paul that was founded in 2012. The fundraiser was a celebration of Marissa’s life.

Tom Coleman, executive director of the 501(c)(3), was a little bit at a loss for words upon receiving the generous contribution.

“Wow!” he exclaimed, before exhaling. “People really love her. They really do love Marissa.”

Pawsitivity trains service dogs for many disabilities and specializes in empowering veterans and their families.

The money raised is being used to train a Labrador named Goose, who will go to a veteran once the veteran is selected and the dog is trained. Goose attended the golf tournament along with Coleman.

The staff at the organization and Marissa’s family members are convinced she would have loved their organization.

Veterans that have been helped in the past have a range of challenges to overcome, whether it’s blindness, a missing limb or something else.

Coleman said a VA study that came out last year proves what they have known.

At first they used rescue dogs almost entirely, but when the pandemic hit, shelters emptied of them and they started adopting puppies, Coleman said.

Marissa’s mother, Kristen Norby, and Marissa’s father, Erick Norby and his wife, Erin Frank, decided early on they were going to honor Marissa and bring awareness to causes that would have helped their daughter.

“If we can bring awareness to people that suffer from alcohol and mental illness, that’s kind of our goal with this golf tournament,” Kristen Norby said. “We’re not shy to talk about it. She struggled. She went to treatment three times with the last time being September of 2020. She should have stayed for 90 days. She was insistent she only do 30 days.”

Marissa’s parents and her siblings, Reese Norby and twins Ethan and Gabe Frank, have drawn inspiration from within their family values, from the amazing things they learned about Marissa on a trip to Virginia to collect her belongings and a summer reading project of Erick Norby’s that proved timely for the personal journey he found himself on upon finishing the book the day before his daughter died.

The Norbys have always lived with the belief that you never quit. If you start something, you finish it. Marissa had that kind of tenacity. It was in her battle to quit drinking that she died last summer.

Trip to Virginia after Marissa’s death

The family met her squadron at a dinner her Air Force comrades planned for them.

“They were amazing people, for one, and two, they were super proud of Marissa,” Kristen Norby said. “They said she was the person they showed off when the generals and the commander showed up. It seemed like she thrived when she got there with the Air Force. They called her the ‘Go To Airman’ for pretty much everything.”

Marissa served in the Air Force from March 2015 to October 2019, spending all of her time in Virginia other than basic training. She made the rank of staff sergeant on her first try. She worked in the intelligence field.

She won volunteer awards for helping Afghan refugees learn English. That was something she did on lunch breaks, the family learned.

Reese, who was able to break away from the Air Force to make the trip, said an airman said if it wasn’t for Marissa, he would have never made it in the Air Force.

“He said, ‘She took me under her wing and guided me,’ ” Reese Norby recalled from the visit. “Honestly, it was overwhelming. Everyone was sharing stories. It really showed us how much of an impact she had on her unit and the people she worked with.”

Marissa was humble, and these types of stories were not ones she shared.

“She would say things like she got a volunteer of the quarter,” Kristen said. “I guess I didn’t realize how much time she gave back. She didn’t brag about it. That’s just something she did.”

After finishing out her four-year contract, she stayed in Virginia. Kristen said she loved the East Coast and the close proximity to Virginia Beach.

The family did, however, know she struggled with mental health issues and alcohol the last couple of years she was out there. PTSD was a factor due to her difficult and stressful job assignment in the military. As an intelligence analyst she assessed whether things were going to be targeted as well as the potential and actual collateral damage.

“We’re not afraid to talk,” Erick said. “She had difficulty with alcohol. It didn’t help with her mental illness and some medication she was on. They (doctors) were like, ‘Don’t use alcohol with this.’ She didn’t necessarily listen. That was part of the downfall of how she died. COVID-19 and the isolation it brought about didn’t help.”

Marissa’s family tried to help. Kristen, Erick and Erin had all made trips out there.

“I have guilt about that and that I left her out there. I couldn’t make her go,” Kristen said. “She’s 24 years old. You can only try to talk to them and reason with them and offer support.”

Erick said as parents you always wonder if one more email, one more phone call, one more trip to Virginia have helped.

“That’s what you play with in your mind,” Erick said. “We talked about it as a family, and we said going forward we can visit the guilt — the trick is not staying there. That just affects you and everyone around you. But you navigate it every day.”

The Norbys said they thought their daughter drank herself to death. They never suspected suicide as some have. Neither scenario would prove to be true. Instead, her sodium levels had dwindled and hyponatremia set in, leading to her undoing.

Her death certificate issued by the State of Virginia shows the cause of death to be severe hyponatremia due to complications with chronic ethanolism (alcohol dependence).

“The medical examiner explained to us that Marissa essentially died from the lack of alcohol in her system, “meaning she was trying to detox on her own, which can be very dangerous,” Kristen Norby said. “We’re in this group of people (that have lost a child) that nobody wants to be in. Losing a child ... I don’t know if there’s even a word for it. It’s a struggle every day.”

The family looks for therapeutic ways to spend their time. The Norbys and Franks have volunteered at Magnus Veterans Wellness Clinic in Dayton as a way to give back to veterans. Erick, Ethan and Gabe do things like help park cars and Kristen and Erin help with set up. Marissa’s mom, Kristen, and her bonus mom, Erin, volunteered most recently at Magnus and Friends Festival on Aug. 20.

“This gives us purpose ... to continue to honor her and make her proud,” Erin Frank said. “(It allows us) to talk about her, to tell her story, and hopefully help others by telling it.”

The golf tournament and working with Pawsitively has been another blessing and great use of their time therapeutically.

Erin Frank, who called Marissa her bonus daughter and a blessing, said the blended family of Norbys and Franks has sensed the hand of God and Marissa’s presence in their efforts leading up the memorial golf tournament, including a few days before the tournament while talking on the phone with Coleman.

“I was sitting outside throwing the ball to my puppy while on the phone with him as we went over final details for the tournament,” Erin Frank said.

After pinning down a few details related to the day of the event, she casually asked him the name of the dog he was bringing.

“He said, ‘I think I will bring Goose, he is a perfect dog to bring,’ ” Erin Frank said. “I stopped throwing the ball to my dog and sat there for a second, then I asked him to repeat the name of the dog.

“When he told me a second time that the dog’s name was Goose, I had chills! I shared with him that Goose was Marissa’s nickname as a child.”

The two were stunned and convinced this was a sign.

Grieving father has been aided on the journey by book project

Erick, a principal at Armstrong High School, has found strength from “Row the Boat,” a book by P.J. Fleck and John Gordon that he finished the day before Marissa died. The book is about Fleck’s child dying when he was born, and how that has impacted Fleck as a person and as a leader, Erick said.

“He only had 5 minutes with him,” Erick said. “How does he honor his son from this point forward? We had 25 years with Marissa. How do we honor her and help us grieve and help people?

The family motto — “Norbys never quit” — also resonates even in the worst of times.

“Somehow, we’re going to keep moving forward,” Kristen said. “If we can encourage others to do the same. (For those struggling with mental health and addictions), there’s no shame in going to rehab or asking for help.”

That message was shared at the golf tournament. So was the love for Marissa.

Goose is not the first connection to Elk River. The organization also trains service dogs for other reasons. The nonprofit trained Olaf to be a therapy dog to work with special needs children at Salk Middle School in Elk River. Here’s link to the 2014 Elk River Star News article about Pawsitivity: https://www.pawsitivityservicedogs.com/olaf.