Save a Dog Today 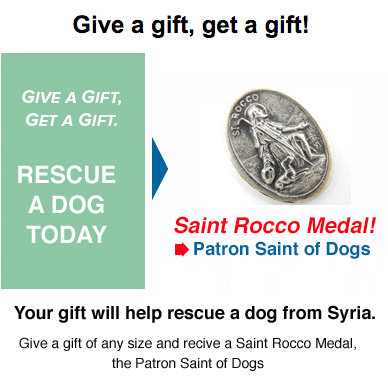 New! 10/13: The BBC reports about Syria, "Dead cats, dogs & donkeys to be eaten to avoid starvation".

A group of Muslim clerics in Syria have issued a fatwa permitting people to eat cats, dogs and donkeys to stave off the threat of starvation.

The Syrian refugee crisis has devastated the country, and more than 250,000 pets have been left to fend for themselves by their owners fleeing for their lives. These refugees are unable to return for their pets, and so food left behind for them is running out, and dogs and cats are being forced to survive without their owners.

As part of our commitment to rescue dogs, Pawsitivity is collecting tax-deductible donations to rescue and transport abandoned dogs to rehoming centers throughout Europe and eventually the United States. Some of the dogs and cats will be reunited with their owners, or if their owners cannot be found, the dogs will be given a new home.

Please donate any amount to rescue a dog today.