The following is a wonderful guest post by the author of the book, “Six Feet to Independence,” Lauryn Walton.

It's easy to think you know what it's like to have a service dog when you see one in public. However, what the public sees is only the tip of the iceberg. Most people don't realize that having a service dog is one of the hardest ways to mitigate your disability. I recently wrote a book titled Six Feet to Independence where I go into six areas most first-time handlers don't know to think about before they get the dog. The one I want address here is the fact that a service dog is just that--a dog. 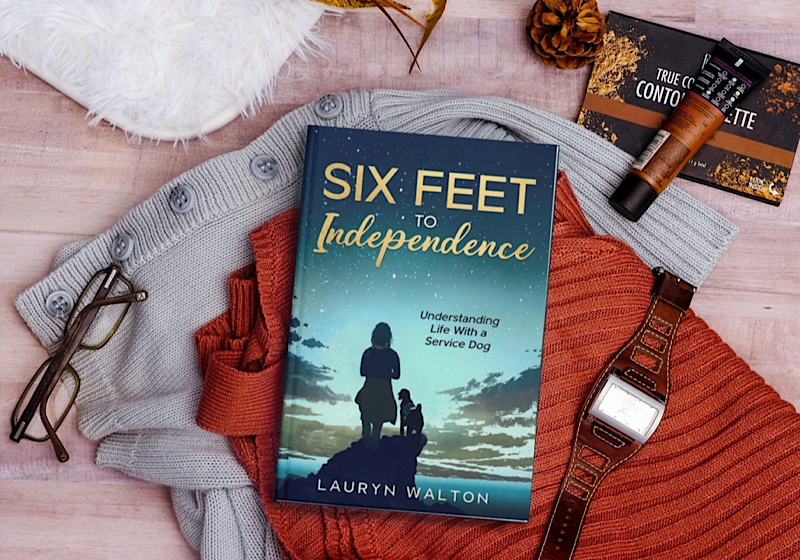 A working service dog’s demeanor is completely different than one at home off-duty. When the team gets home and the vest comes off, they’re more dog than service. They’ll sometimes do things you wish they wouldn't. It can be very easy to get frustrated in these times or wish they could wear the vest all the time because they behave when in the vest. Before you start to scold or get upset, take a second to stop and think about why this might be happening.

1. They Have to De-Stress

When service dogs are working, they're on high alert and in very stimulating surroundings. They are on their best behavior. When they get home, they may just need to get their sillies out.

My dog, Cor, doesn't fight baths, but he sure doesn't like them. He's a poodle, though, so I get to give him a bath every week or two. He does good in the bath--standing still and letting me do my thing, because he knows it'll be done faster that way. He has a lot of nervous energy afterward, though, and he has to get that out, so my sister takes him for a walk while I clean up the bathroom.

If we don't direct that nervous energy toward a productive outlet, he ends up doing zoomies--speeding from one side of the house to the other. That, or he'll nearly turn himself inside out rubbing along the couch. The same thing happens all over again when I need to groom him.

Cor's nose is why we can train him to alert and respond to my oncoming seizures. My seizures stem from a release of certain hormones--as close as we can figure--and those hormones make me smell different to a nose as strong as his.

The equal and opposite reaction to honing his nose to catch fluctuations in hormone levels? His nose is honed to perceive other things, too. My sister took a neurotransmitter test recently, and he kept coming back to the place where the samples were drying, visibly sniffing. He'll go get snotty tissues and dirty socks, because they smell like me and his nose "works, now, Hoomans!"

Taking him outside to go potty takes longer now because he's sniffing around the yard, gathering scents, and reading the local newspaper. I let him, because I don't mind him knowing what's going on in the backyard's ecosystem, and his alerting to my seizures is far more valuable to me than long potty trips is frustrating.

This happens a lot more with a puppy than a fully-trained dog because these animals have far more to learn about the human world when they're younger. The fact remains, however, that these animals are trying to figure out how to live in another species' world. They don’t know what we know—that thingslike chocolate, xylitol (also called birch sugar), coffee, and several other human foods are toxic for them. They don’t know that salt used on ice in winter is toxic to them and dries out their paws. They may be doing things that cause you frustration simply because they don't know better.

Cor and I got into a rolling car crash a few months ago, and he has a hematoma on his spleen as a result. The doctors said we'd have to take it easy for a while to let it heal properly. Otherwise,it could rupture and create the need for an emergency surgery. Cor doesn't know that; he thinks he's back to hale and hearty. He doesn't understand why I take him potty on a leash. He'll try to get outside without one because he doesn't know what I do. He doesn’t know that my keeping him from running like he wants to is me keeping him alive.

He’s still very clearly a well-trained dog, though. We've worked with him on not bolting out the front door. I can have him in a sit-wait with the front door open while I walk outside and he won't bolt. He'll only try to squeeze outside through the backdoor.

4. You're Their Safe Space

Having a service dog is a very strange sort of partnership. It is the dog's job to protect us from ourselves. In order to be able to do this, we have to protect them from--and train them to react correctly to--the world around us. They can tell that we’re about to have a panic attack, but—sometimes—the smell of a chicken bone in the trash is just too enticing. They don’t realize cooked bones aren't safe for them. They may not realize that taking it out of the trash is bad behavior, or they may not care (going back to following their nose).

When you have siblings, you can say things to them you can't say to others. If they ask for a pencil, your response of "how dare you ask such a thing?" won't have as bad a response as if you said that to your boss. Why? Because your siblings know not to take everything you say at face value--you love each other too much for that. They're a safe place to release your frustrations. You are the same way for your dog. They know you love them and won't stop just because they're sassy; you're a safe place to release that nervous or feisty energy. Does that mean you should let them get away with murder? Of course not--use the moments of "sassy" for teaching and correction moments, but don't expect them to be perfect little angels all the time.

5. They Get Mentally Bored

Cor will make it very clear, sometimes, that he has not worked, trained, or been mentally stimulated in too long. This is when he'll generally grab socks, underwear, tissues, and paper. He parades around with it to get our attention because he's bored. I've had him go and get his vest and bring it to me, even.

Service dogs have to be smart to understand what you're training them to do. That level of intelligence makes it easy for them to get bored, though, and you have to make sure you're stimulating them enough.

Service dogs are lifelines and valuable medical equipment. They're also dogs, and if you don't understand that before you get one, you're setting both you and the dog up for frustration.

If you're interested in finding out other areas that most new service dog handlers set themselves up for frustration, get a free copy of my book here--all I ask is that you pay shipping and handling.

You were not born to fail.