The #1 question we get from the public is "What breeds do you use for Service Dogs?" If you want the short answer, click here (our FAQ). If you want the long answer, read on. :-)

Finding the right characteristics in a candidate dog is more complicated than one might think. One might assume the answer might "Mixed breeds" or "goldens and Labs," but those answers would be doing individual dogs a disservice, and we estimate that only one out a thousand dogs is appropriate for Service Dog work. For instance, while some golden retrievers and Labradors are good at Service Dog work, many others are high-energy and are not a good fit for staying calm all day long. We use tests to find candidates (details below), but there are many other variables also involved. For instance, the breed characteristics that would work for one family may not be the best for another. It's important to know the typical breed characteristics, of course, but what is just as important is the fact that not all dogs display their breed’s traits. Purebred dogs are certainly purpose-bred, but breed characteristics are remarkably different depending on which particular dog you happen to be looking at. This page will give you at least a rough idea about breed standards and why so many breeds don't work well with our work.

Note: Finding the right candidate dog for Service Dog training is no small task. As mentioned above, we estimate that only one out of a thousand dogs is appropriate. Even with that level of selectiveness, at all Service Dog organizations, “according to some estimates, only 50% of dogs entering training progress to the level of a service dog.”[1]  Many trainers and breeders have designed tests for dogs that focus on puppies, but unfortunately, empirical studies show that these tests, while easy to give, often don’t predict adult temperament.[2] Specifically, a study of the Campbell test to determine a puppy’s behavior concluded that “the test has no predictive value regarding future social tendencies.”[3] For adult dogs, the most commonly used predictor of temperament is the Weiss & Greenberg test, but it, too, has been empirically tested to be a “poor predictor of training success.”[4] Thus, we use a different testing method. First, if the dog is the right age and weight, we start with a "pretest" we devised to determine if a dog might be a good candidate for adoption. Rescues are always surprised at how low-energy and how low prey-drive we like candidates to be, for instance--it makes them harder for us to train but ultimately easier for the handler to live with. We also are looking for a dog to be gentle and easygoing yet but brave (a rare combination of traits). Few dogs pass this pretest, but if they do, we then use a more formal test called the Dog Personality Questionnaire (DPQ), which is "demonstrably reliable and valid"[4] at finding a good candidate for training. This Dog Personality Questionnaire is more difficult to administer than either the Campbell or the Weiss & Greenberg test, but since it's more accurate, we feel that the extra effort is worth it.

Here are some of the questions we are often asked:

Does the sex of the dog matter?

In terms of Service Dog work, it really doesn’t matter whether a dog is male or female. According to one study, neither sex is better than the other at being less impulsive[5] (which is an important trait to NOT have in a Service Dog).

There are basically two different types of dogs—purebred and mixes—with advantages and disadvantages to both. Our policy is that each potential candidate should be tested individually to see if he/she has a good temperament without regards to whether the dog is purebred or not. Whether a particular dog is a mixed breed or a purebred, however, some general knowledge about breeds helps us to narrow the field. It’s all too easy to stereotype a breed and miss the fact that any particular dog can differ in temperament from the breed standard. So, with the caveat that it’s much more important to focus on the nature of the particular dog we are looking at rather than just its breed, we still consider the common traits of specific breeds.

Goldens, Labs, and mixes are most common, and while various other large breeds can work as Service Dogs (Newfoundlands, Collies, etc.), they are not widely available as rescues. When looking at rescues, we always keep in mind that each breed has been bred for some particular characteristic but often the trait that used to be so desirable in a particular breed is now quite difficult to live with in our modern lives. Note that I love all dog breeds, but most are not best for this particular work. A 1983 survey asked owners, breeders, trainers, and judges their opinions about breeds and behavioral traits. They divided breeds into seven clusters, only one of which is appropriate for Service Dog work:[8]

Note that we didn't write the above opinions, they're just from a 30-year-old interview, so these judgements are highly subjective. But at least it's a place to start. If we do know the breed (or breeds in the mix), we always check the above list plus the breed standards set by the American Kennel Club before investigating further. I'm always surprised that breed standards are usually more about looks than temperament, but again, these standards are at least a place to start (and then we'll test each individual dog). If the breed's usual temperament includes words like “high energy”, “watchdog” (aka aggressive), or “tenacious” (aka low trainability), we usually move on. Sometimes the phrase "Requires an experienced owner" is used to describe a breed--but, even if the handler is an experienced owner, we wouldn't choose a breed that is noted for being difficult. It's important to realize the high levels of stress that Service Dogs work under--in part, simply because we require them to live calmly indoors all day. We all are expecting a lot of Service Dogs, and to add to their difficulties by selecting a breed that is known for being stubborn or aggressive, we're not setting the dogs up for success. Once we start training a candidate, any problematic characteristics that come up will make its life harder. 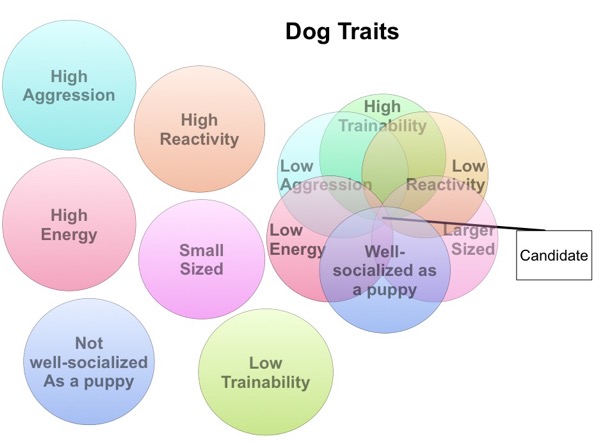 Regardless of the breed, we test a purebred dog the same way we test a mixed breed—that is, we rely on the test results and evaluation period rather than placing too much faith in breed characteristics. Note that we don't consider candidates that are less than forty pounds because smaller dogs are so easily stepped on in crowds (and can thus develop fear or aggression).

It's nice to know that the Guide Dogs for the Blind Association in the United Kingdom chooses its dogs similarly to the way we do. “The main breeds used as guide dogs break down approximately into the following classifications: 50% Labrador/golden retriever crosses, 33% Labrador, 10% golden retrievers.”[9] Note that, at least anecdotally, the breeders of Labs and goldens in the United Kingdom focus more on an easygoing temperament (rather than on appearance conformation or a high-drive hunting temperament). 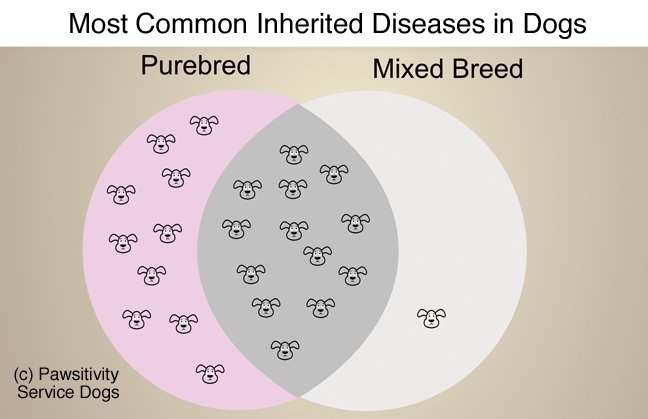 One advantage of mixed-breed dogs is that they’re less likely to have inherited diseases. A recent study of mixed breeds vs. purebreds looked at 24 different genetic disorders. For 13 of the genetic disorders, no difference was found between mixed breeds and purebreds, but purebred dogs were found to be more likely to have 10 of the genetic disorders.[10] Unfortunately, the study focused on the number of diseases rather than the prevalence of each disease, so it's hard to draw firm conclusions, but in general, it does seem like mixed-breed dogs tend to be healthier. In other words, there are some inherited diseases that are just as common in mixed-breed as purebred dogs, but unfortunately, there are many inherited diseases that are much more common in purebred dogs.

A disadvantage of mixed-breed dogs is that we have less information upfront about possible temperament issues, such as aggression. So just as with a purebred dog, any time we consider training a mixed-breed dog, we rely on the temperament test results and the evaluation period to determine whether or not that specific dog is a good candidate for Service Dog work. I once asked the Head Trainer of the biggest Hearing Dogs nonprofit in California if he had some easier way of finding good candidate dogs (even with all our experience, we find it quite difficult). He said that their organization has just as much difficulty as we do, and it's part of the reason why Service Dogs are so rare.

[5] Jones, Amanda Claire. “Development and Validation of a Dog Personality Questionnaire” PhD diss., The University of Texas at Austin, 2008.

[6] Trevejo, Rosalie, Mingyin Yang, and Elizabeth M. Lund. "Epidemiology of surgical castration of dogs and cats in the United States." Journal of the American Veterinary Medical Association 238, no. 7 (2011): 898-904.