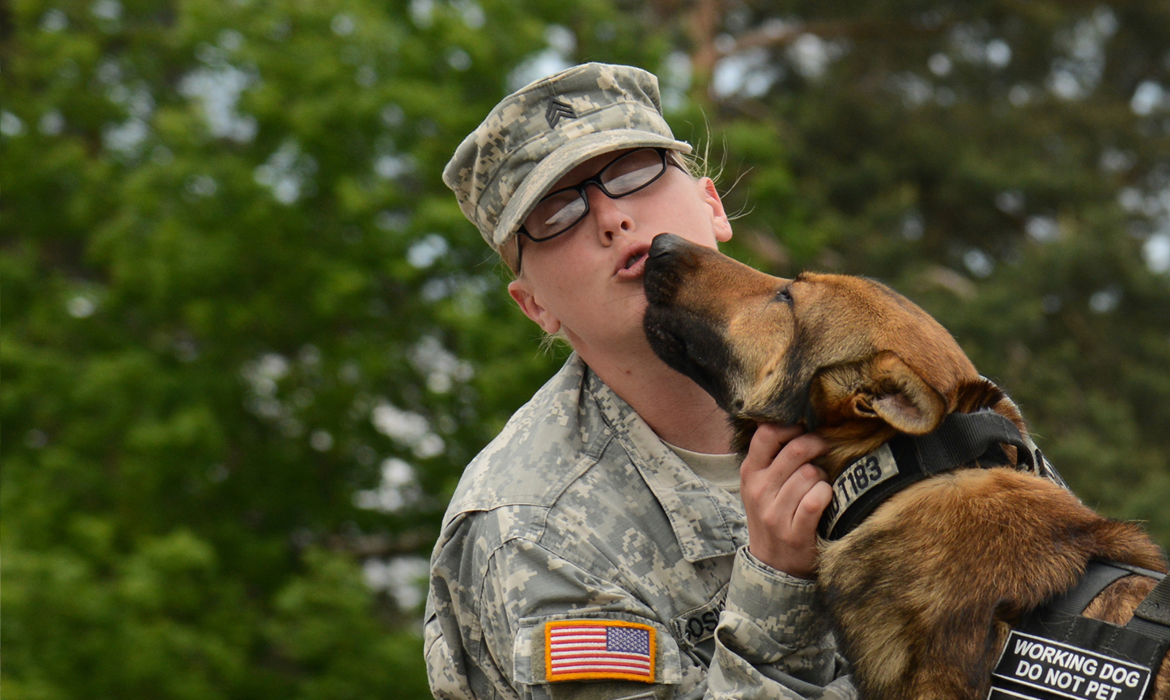 At Pawsitivity, we use the same method that both the U.S. Army working dog program (above) and Guide Dogs for the Blind uses:

"All of the dog training is based on positive reward or feedback" -- U.S. Army Training and Doctrine Command.[1]

Want to know why both guide dogs and military dogs are now trained the same way? Read on. Like both these organizations, we need the service animals to be:

In some ways, we go further than other organizations because we have the added need for the dogs to be:

For all these goals, the most reliable way of attaining them is positive reinforcement. Positive reinforcement works faster than other training methods because it increases the odds of behaviors being offered. That gives the trainer more behaviors to mark and reward, which, over time, evolve into the targeted behavior. Because of its effectiveness, “training procedures are similar for all types of service dogs. Trainers use positive reinforcement techniques"[2] (emphasis mine).

There are plenty of results-based studies that provide scientific justification for using this method for service animal training. The following are just a few examples.

The Canine Department of the Netherlands National Police Agency reported the following:

“[With] the first dog, [it] took me eight months to train him to follow a laser. With operant conditioning, it now takes me four weeks.” [4]

2. The largest guide dog organization in the United States also reports that positive reinforcement is faster.

As Pawsitivity learned (in our 2017 Positive Training workshop in Portland, Oregon), Guide Dogs for the Blind, the largest service dog training school in the United States, used to train with the old-school aversive methods,[5] but upon switching to modern positive-reinforcement methods they not only increased their pass rate, but also, "the dogs can become full-fledged Guide Dogs in half the time."[6]

Using aversives may lead to negative side effects.

A 2014 study in the Journal of Veterinary Medicine concluded that there were often side effects (fear) when dogs were taught using aversives. Thus, “There is no consistent benefit to be gained from e-collar training but greater welfare concerns compared with positive reward based training.”[7]

A 2013 study published in Applied Animal Behaviour Science found that owners who used methods based on positive punishment and negative reinforcement were more likely to report their dog was aggressive toward family members or strangers outside.[8]

Positive reinforcement is less stressful for the dog.

Another study from Applied Animal Behaviour Science looked at two classes of dogs being trained to sit. One group lured its dogs into a sitting position with a treat, and the other group pushed down on its dogs’ behinds to force them into position. The study showed that with positive reinforcement, the dogs were 15 times less likely to cower or slink away from their owner. Additionally, the dogs trained with positive reinforcement were more likely to look their owner in the eye. Because we want to encourage a service dog to look at his/her handler and to initiate social interactions, this study’s conclusions dramatically demonstrate how much richer the handler/dog relationship can be with positive reinforcement.[9] Positive-reinforcement training is also much safer[10] (and presumably less stressful) for the handler and their family, as well.

Much Less Risk of Fear.

One of the big advantages to using positive reinforcement is that there isn’t the same risk of side effects. Simply put, "animals become afraid, either of people in general or of specific individuals as a result of aversive handling".[11] Not only is it unpleasant for the dog, but it also can be damaging to the handler's relationship with the dog. Most dogs will sell their soul for a tiny bit of hotdog (or, for high-drive dogs trained for police work, a rousing game of ball throwing). We can also use praise, and we can build in real-life rewards, such as getting to walk through a door. The dog doesn’t just get to run through—by sitting and waiting for the release word, the dog is rewarded by getting to go outside for a walk. Or when out for a walk, the dog is rewarded by getting to cross the street after sitting. There's many ways to reward a dog for doing what you want him to do, which also helps to keep up his training. The dog doesn’t know it’s work—it’s like a game! This way, both the dog and handler are winners.

Another advantage of positive reinforcement is that a service dog trained this way will offer lots of behaviors. With use of adversities, one runs the risk of the dog “offering fewer and fewer behaviors” because “not behaving is not the same from the dog’s perspective as exhibiting improved behavior.”[15] In other words, if a dog isn’t afraid of being punished for doing the wrong thing, the dog will feel uninhibited to try various approaches to getting rewarded until the dog finds the right one.

Both the U.S. Army and Guide Dogs for the Blind are much larger organizations than Pawsitivity, but we feel proud to follow in their footsteps and use such a reliable and effective method. 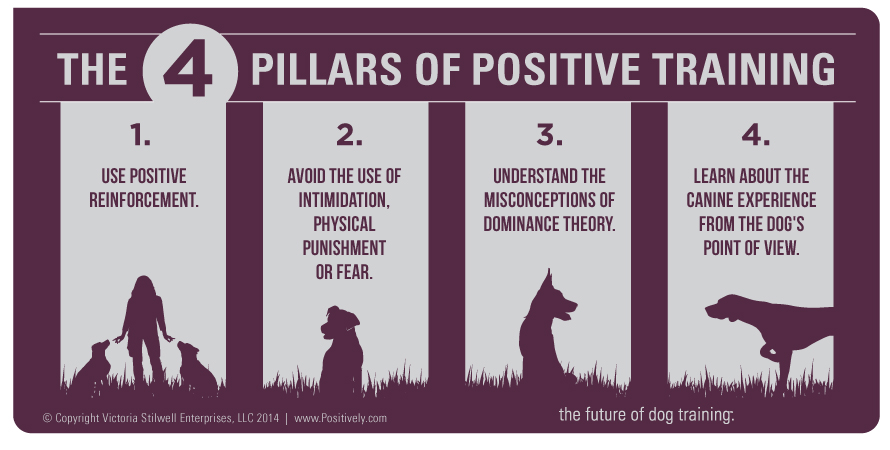 [4] From a three-year project for the Canine Department of the Netherlands National Police Agency, 1996, Simon Prins, coauthor of K9 Behavior Basics: A Manual for Proven Success in Operational Service Dog Training (2010).

[9] Deldalle, Stéphanie, Florence Gaunet. “Effects of two training methods on stress-related behaviors of the dog (Canis familiaris) and on the dog-owner relationship.” Journal of Veterinary Behavior 9, no. 2 (2014): 58-65.