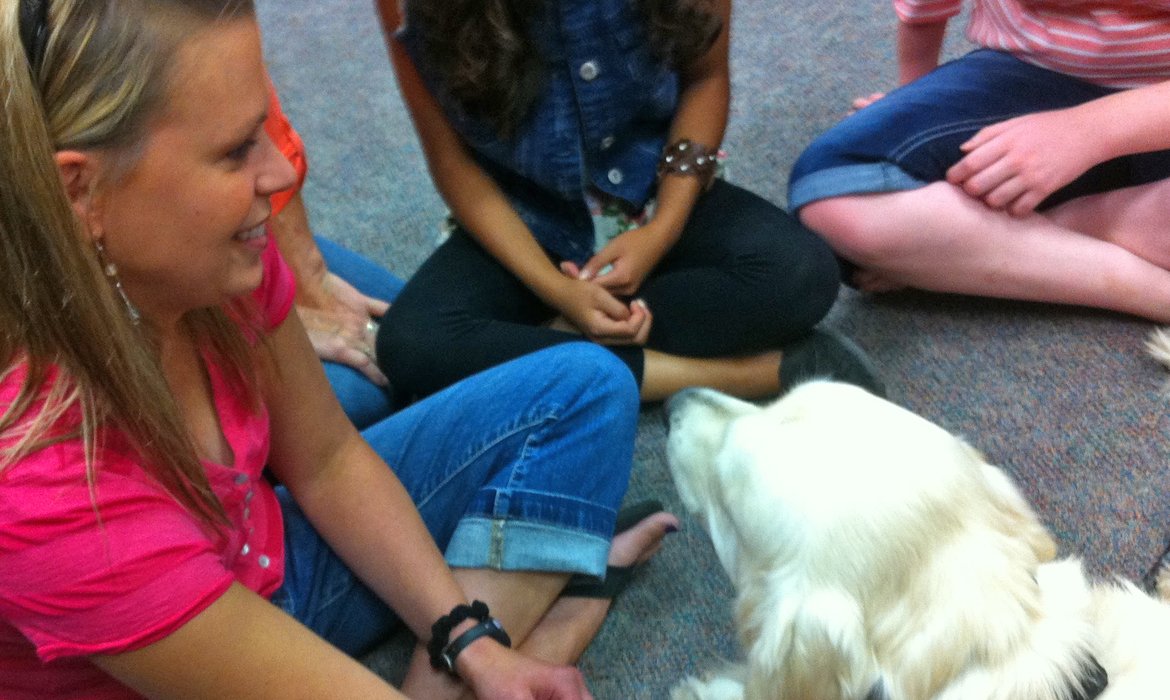 How teachers (and sometimes students) use dogs to help with disabilities.

Working with schools is a little tricky because we're not only dealing with the Service Dog and the family, but if the dog will be going to school at all, there are a lot of other people to take into account, including principals, teachers, other students, people with allergies, etc., and our work quickly gets into a lot of gray areas. Many people assume that they are legally entitled to bring their service dog everywhere, including to school, but that is not always the case. I am not a lawyer--instead, on this page, I’ll give my interpretation of the rules, regulations, pitfalls, and minefields.

Please keep in mind that this topic is full of murky areas, and in regard to children bringing a service dog to school, even the “courts have been inconsistent in their rulings, suggesting interpretation of the law is often based on misunderstanding.”[1] So feel free to take my interpretations and opinions about this topic with a grain of salt. After all, if even the courts haven’t settled on their interpretation, how can we predict with any certainty how policies are going to be applied? At the very least, while I'm not a lawyer, this page explains what, in my research and experience, I feel the current understanding of the law is.

The law that affects schools is, like most everything to do with service dogs, the Americans with Disabilities Act. As we talked about on the page about regulations, the law is rather loosely worded (to give people lots of freedom) and thus the interpretations of the law have changed throughout the years. The law basically asks the question, “Does the dog help a person who has disabilities with their activities of daily living? In other words, does this person need the dog to help them get through their day in a significant way?”

With a service dog, the answer is yes—but there’s a big “however.” In our opinion, some children (especially children who have a disability) can’t really be in charge of a dog. For instance, with an autism service dog, it’s usually the parent who is really in charge of the dog. If the child is going to bring the dog to school, the child is most likely low-functioning enough that the teacher would have to be in charge of the dog (which would include bringing the dog outside to go potty). That’s a lot to ask of someone who already has their hands full with a classroom of children. In this particular scenario, the teacher will usually point out to the parents and administration that the child in question can’t handle the responsibility, so the dog must be left at home.

While sometimes it works really well to have a child bring their service dog to school, other times the situation can create unrealistic expectations for a variety of individuals, including:

Sidebar: Principals have asked me about how to accommodate children with allergies. My answer to them is that this is a gray area. All children—whether they have autism or other disabilities, or they have allergies—need to be accommodated, so there isn’t really a clear answer. Principals seem to be taking things on a case-by-case basis, and no permanent or hard-and-fast rules have been determined.

Some Background: Our Two-Hour Rule

For any handler, we recommend the “two-hour rule” when doing public access with their service dog—that is only having the dog work for two hours at a time. When you stop to think about it, it’s kind of amazing that we as a society ask workers or students to sit at their desks and think hard for six or eight hours a day, when, as Dr. Jacob Allen Shipon puts it in his book, A Life of Optimal Well-Being, “In order for our minds to function at their maximum level, our bodies must simulate that of our Paleolithic ancestors.”[2] In other words, we should really be running around doing things (much like a dog wants to run around and do things!), not just sitting still all day. This disparity between the ideal and reality goes back to about how, for the vast majority of the time that dogs and people have been on this Earth, they both have stayed active all day. While we can force ourselves to sit still for six to eight hours of work or school, it’s unrealistic to expect dogs to do so—and this can be a good thing, as it reminds us of how we put such artificial and unhealthy demands on ourselves.

One example of how well this rule works is when you see a drug-sniffing dog at the airport. You might think, “Wow, this dog is working at the airport eight hours a day, just like their handler.” But in fact, “A drug dog can work hard for about 15 or 20 minutes, and they then must rest for an hour.”[3] Thus, during a full eight-hour shift, the dog is still working for less than two hours total, just as we would recommend.

While We Recommend the Two-Hour Rule, the Law is More Flexible

Even though we have this two-hour rule (or two-hour recommendation), the interpretation of laws by the courts is moving toward forcing schools to accommodate service dogs for longer periods of time (much longer, in some instances, than our recommended two-hour rule). As a result, we like to emphasize that while some service dogs and some children can handle full days of school, it’s not a result that trainers can promise.

When Dogs Work Well in School

While some teachers don’t want a dog in their classroom, other teachers love having a dog there. For instance, many teachers find that a service dog can be helpful in a special-education classroom of low-functioning students. One peer-reviewed study about this scenario concluded that “qualitative analysis of all coded data indicated that the dog’s placement in this self-contained classroom: a) contributed to students’ overall emotional stability evidenced by prevention and de-escalation of episodes of emotional crisis; b) improved students’ attitudes toward school; and c) facilitated students’ learning lessons in responsibility, respect, and empathy.”[4] Our experience confirms what the study says. For instance, when one of our Service Dogs is brought by the parent into the classroom for just two hours at a time (which is what we recommend), not only is the one particular child usually calmer and easier to work with, but the teacher reports that all the other students in the classroom are usually calmer and easier to work with, too. We have found that most teachers of special education classrooms end up asking for the dog to be brought more often to the classroom because the whole class is easier for the teacher to deal with when the service dog is there. In these cases, the student is not cognitively ready to handle the dog, but rather, the parent is with the dog in class for the two-hour visit, and the parent has assumed responsibility for letting each student pet the dog, one by one. This kind of responsibility is NOT one that can be placed upon a teacher.

Here’s a story that illustrates one of the gray areas of this law:

We trained a service dog for a boy who has Landau-Kleffner Syndrome, which is similar to autism and also involves seizures. (This is the disability that Jenny McCarthy’s child has.) He also has issues with auditory processing. Over the course of the last three years, his educational arrangement has changed several times.

The boy was in the second grade the first year he had his service dog. He was in an unusual situation—in addition to his special-education classroom, the boy would sometimes go to mainstream classes but would have an assistant with him who would help with his auditory processing. The dog was tentatively brought to the special-ed classroom, and the teacher decided she didn’t want the dog there. She found that having the dog in class was just too much work—the boy was so low functioning that he couldn’t handle the dog on his own, and she, with a classroom full of kiddos, couldn’t take care of both the classroom and the dog.

In the second year, when the boy was in fifth grade, he was assigned a one-on-one assistant who was very pro-service dog. The assistant asked that the dog be with her and the boy during the day. Instead of adhering to our suggested two-hour rule, the assistant wanted the dog in school for a full eight hours, so the parents slowly started bringing the dog to school for ever-increasing lengths of time, starting with an hour, then two hours, then three hours, etc. The teacher was thrilled and kept wanting more hours with the dog, reporting that the child behaved so much better around the dog that it made her life easier to have the dog around.

We were delighted with this result, and the one-on-one assistant told a great story about how the child, instead of being shunned by the rest of his classroom, was now becoming popular because his service dog was serving as a social bridge! One of his classmates loved the dog so much (and thus loved the boy with the dog so much) that she said, “Oh, I wish I could be this boy’s sister!” Wow! This new situation contrasted markedly with the year before, when the child basically had no social interaction with the other children because he had trouble hearing and understanding them and was lower functioning than his peers.

When the boy was in the sixth grade, his new teacher did not want a service dog in the classroom. She wasn’t a huge fan of dogs, and she thought it would be more trouble than it was worth to her. She thought that a half day might be okay but the mother couldn't work that arrangement into her schedule. As for right now (2017), the dog stays home while the student goes to school.

Great quote from the boy's mother:

"One of the things that the had done for my boy is elicited opportunities for speech. It's amazing to me the way he talks about the dog--even if he's not always cuddling with her. Even as he improves, I think she's great for him because she's clearly his and always around for attention and play. And to elicit conversation!"

The story of this child and his service dog really exemplifies how each situation is different, and even with the same child and the same dog, the situation can change depending on the teachers. We highly recommend that families pay attention to what each teacher wants because they’re the ones who are really affecting the child the most. If they want to use the dog, they can, but in our opinion, they should not be forced to use the dog as a tool at all.

Note: The silver lining of Landau-Kleffner Syndrome, as opposed to autism, is that at puberty sometimes the symptoms decrease or go away. In some ways, the child can somewhat “grow out” of it. We hope that this is the situation for this boy, and perhaps in the future, he may not even need the use of his Service Dog. We are crossing our fingers—good luck, kiddo!

[3] Drug Interdiction and Other Matters Related to the National Drug Control Policy: Hearing before the Subcommittee on Coast Guard and Maritime Transportation of the Committee on Transportation and Infrastructure, House of Representatives, One Hundred Fifth Congress, Second Session, June 10, 1998. Washington: U.S. G.P.O., 1998.