Pawsitivity featured in the July issue of "Saint Paul Magazine"!

Pawsitivity Service Dogs is featured in the July issue of Saint Paul Magazine! 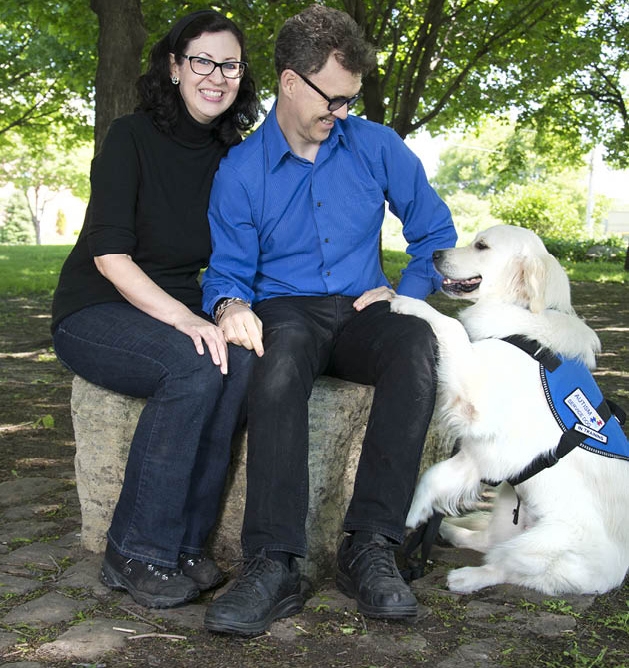 When Tom and Julie Coleman founded Pawsitivity Service Dogs four years ago, it was not just a clever name. They’re on a mission to bring positivity into the lives of families who are challenged with a connection to severe autism and other disabilities associated with the autism spectrum. “We are changing lives one dog at a time,” says Tom Coleman, who with his wife Julie trains autism service and therapy dogs for children.

Tom and Julie’s journey began after meeting a friend with an autistic son and seeing how much a dog was helping the boy. “He wasn’t even a trained dog,” says Tom, who upon further research found that at the time, nobody in Minnesota was training autism service dogs. “We don’t have our own kids, so we thought, ‘How can we help these children?’ We founded this charity, and the idea is that things can be positive and things can get better.”

Service dogs can help children with autism in many ways. “If a child becomes severely agitated, the dog will sit on the lap of the child, and the weight and pressure of the dog can assist them with calming,” says Tom, who also explains how service dogs can help autistic children who have issues with wandering or running off. He calls service dogs a “kid magnet” and says that the dogs are often a social bridge, helping with the isolation and loneliness having autism often brings.

“If you’ve met one person with autism, then you’ve met one person with autism. They’re all so different,” says Tom, who says this is the reason why Pawsitivity selects and trains each dog on an individual basis. Autism can be associated with other disabilities, known as comorbidity, which can include psychiatric disabilities such as major depression, severe anxiety, and panic attacks and also seizures, and the dogs are trained to meet those specific needs.

“We just train two or three dogs a year. It’s very intense, very focused. We go to the doctors’ appointments with the child if necessary. We have the dogs 24-7, and they are constantly getting training,” says Tom, who adds that each dog undergoes 900 hours of training typically over a 12-month period. Currently Pawsitivity has a wait list, which is closed.

The Colemans primarily rescue golden retrievers and Labrador breeds for training, and adult dogs are chosen over puppies so that their temperament is known. “From start to finish, we control the whole process. They’re all ‘second chance’ dogs,” Tom says. “We go through this checklist of what dog would be appropriate, and about one out of 1,000 dogs is. Smart dogs tend to be high energy, and low-energy dogs tend to be not very trainable. It’s hard to find one that is low energy and smart enough.” Tom explains that the dogs cannot be afraid of anything or be aggressive in any way, such as barking at cats. They also need to be healthy and the right age.

The dogs are trained only with positive reinforcement techniques. Training exercises include “proofing a dog’s commands, such as performing a strict heel through the distractions of the barking, sniffing or lunging of other dogs in a dog park,” Julie says. Pawsitivity Service Dogs is a partner member of the International Association of Assistance Dog Partners, and each dog is individually trained for the handler's disability, circumstances, and needs. 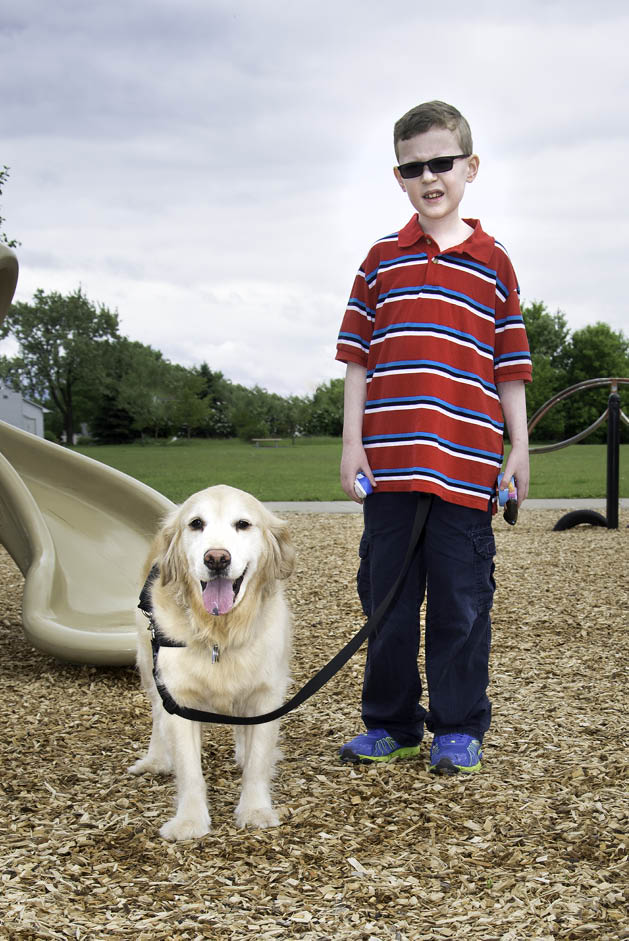 “Our biggest hope was that Bailey would keep Henry from running away and getting lost or injured,” says Christy Wills. “Henry has many medical issues, and we are frequently at doctor appointments. He has a hard time waiting in line to check-in and waiting in the lobby or exam room. Henry doesn’t try to bolt when he is tethered to Bailey. He is much more calm and able to wait without a meltdown. Just last week a woman approached and asked, ‘What’s your dog’s name?’ Henry actually answered for the first time ... If Henry did not have a service dog, that opportunity to practice social skills would not have happened. Bailey is a wonderful social bridge.”

Special education teacher Mary Ostmoe received her dog Olaf from Pawsitivity to use as a therapy dog in her classroom, working with autistic students at Salk Middle School in Elk River, Minn.

“Olaf’s No. 1 function is to illicit smiles and happiness. He does this well. He is also very calming to students who are overstimulated or agitated,” Ostmoe says. “Many of my students have sensory issues, and I can usually talk them down as we both sit on the floor and pet Olaf.”

“Having Olaf in my class has increased the community feel of our school,” Ostmoe adds. “I have never had so many general education kids stop by my room to see him, which has increased communication and friendships with my special needs students. He calms kids and makes them feel good about themselves. Kids love dogs.”

The process of training each dog costs $35,000. Each family is required to raise 50 percent of the amount through fundraising. “I started out asking friends, family, coworkers and local businesses,” Ostmoe says. “Then I set up an account on GoFundMe and wrote many grants that were funded. The Josh Richardson Youth Arts Foundation donated $5,000. Sidewalk Dog also held a fundraiser for Olaf, and the Lions Club was extremely generous.”

The Wills family also did online fundraising with help from friends and family. “Yes, a service dog is expensive,” Wills says. “If you consider how much time, talent and skill go into training a service dog, it’s really not that much, though.”

Pawsitivity has been recognized for excellence in the nonprofit world, receiving the Humane Charity Seal of Approval and a Gold Charity rating by Guidestar Exchange. Pawsitivity was also awarded the Top-rated Nonprofit Seal by GreatNonprofits. “Only 2.2 percent of the cost goes to administration,” Tom says. Pawsitivity is a 501(c)3 and accepts donations, which are tax-deductible.

“The most rewarding part is hearing how families can now go places with their child with autism, which was virtually impossible before they got the dog,” Julie says.

A service dog can help: