Tom Coleman, executive director of Pawsitivity, poses with Lexi, a dog he and his wife Julie are considering for their extensive service-dog training program. 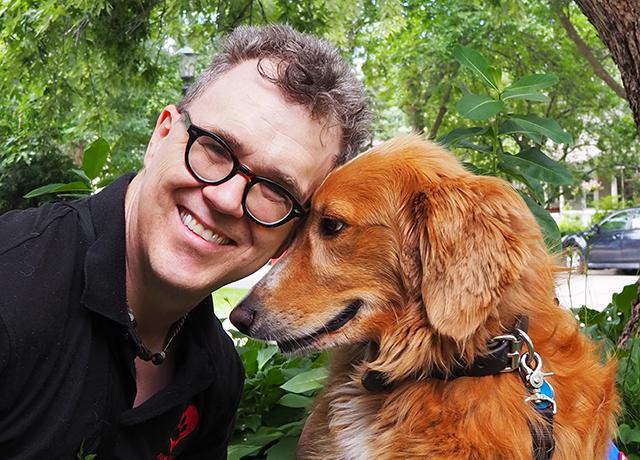 Tom Coleman, executive director of Pawsitivity, poses with Lexi, a dog he and his wife Julie are considering for their extensive service-dog training program.

The shoulder of Tom Coleman’s shirt is covered with dog hair. It makes sense, because as executive director of Pawsitivity Service Dogs, Coleman spends the majority of his waking — and sleeping — hours with dogs.

In 2012, Coleman and his wife, Julie, founded Pawsitivity with the goal of training rescue dogs to become service dogs for people with physical and developmental disabilities. Their focus is on children with autism, but the Colemans also have trained dogs to assist adults with PTSD. The dogs are trained to help with physical tasks like turning on light switches or restraining autistic children from running into traffic, but they also learn to respond to their handlers’ emotional needs.

“Children with autism and adults with PTSD have specific mental health concerns that go beyond their physical limitations,” Tom Coleman said. “Having a service dog can help lessen the psychological burden on every member of a family.”

On a recent sunny afternoon, Tom Coleman sat outside his St. Paul home beside Lexi, a calm, thoughtful poodle/lab mix recently rescued from the southern United States. While Lexi showed many promising characteristics, she wasn’t yet ready to begin full service-dog training. All Pawsitivity dogs first go through a one-month observation-and-evaluation phase.

“We’re hoping she’d be good for a child with autism,” Coleman said, rubbing Lexi’s long, furry ears. “We have to spend more time with her to see if she’d work out.”

Training a service dog is an exacting process. The dogs are selected for unique, sometimes intangible characteristics like confidence, calm demeanor, patience and strength. The training process takes a year or longer, and during that time the dogs live with the Colemans in their St. Paul home.

“Only one out of 1,000 dogs is appropriate for this kind of work,” Coleman said. Part of the selection process has to do with selecting for specific breeds, he added: “A husky is a great dog, but it wants to pull. A beagle wants to smell. A lab can be hyper.”

Coleman said that he and Julie were inspired to start Pawsitivity after their friend married a woman with an autistic child. Through that family they learned about service dogs for autism. Because Minnesota is known for its high-quality autism support services, Coleman figured that there would already support-dog training programs in the state, but there weren’t. “The nearest program was 1,000 miles away,” he said.

With such a clear market gap, the Colemans decided to found Pawsitivity. They’ve been busy ever since, with hundreds of families on a waiting list for their specially trained service dogs that cost as much as $39,000 each. Coleman said his nonprofit gets 200 applicants for each dog it trains. The waiting list is long.

“We train a couple of dogs at a time,” Coleman said. “It is a very different model. You can’t train more than 2 or 3 dogs a year and do it properly.”

A tool to overcome disability

Henry Wills lives with his family in Maple Grove. Diagnosed with severe autism and global developmental delays, the 12-year-old middle schooler has had his service dog, Bailey, for six years. Bailey, who was trained by Pawsitivity, doesn’t go to school with Henry, but he does accompany the family anywhere else they need to go.

Henry’s mother, Christy Wills, said she decided to look for a service dog when Henry was turning 5. Henry was getting ready for kindergarten, and Wills felt that a service dog could help the family negotiate all the complicated elements involved with making that important transition happen. “I thought it would make things easier on me,” Wills recalled. “A service dog helped made transitions work for Henry and make life easier and happier for everyone.”

Henry usually sleeps only three hours a night. Bailey sleeps with him, and his presence keeps him in bed for as long as possible, helping his parents squeeze out a few additional minutes of sleep. This was part of Bailey’s training, Wills said. ““I asked Julie and Tom if the would allow the service dog to sleep with them so he could learn how to do that for my son. They were open to that.”

Bailey provides emotional support for Henry when he goes to doctor’s appointments.

“Henry has some mental problems that come along with his autism,” Coleman explained. “He has so many disabilities that he goes to the doctor about seven times a month. It used to be that four of those seven times he’d have a meltdown in the office waiting room and have to leave. With his dog helping him mentally, Henry now can get to seven out of seven of the doctor’s appointments.”

Autism isn’t the only kind of mental illness that can be physically disabling. Pawsitivity has trained two dogs to assist men with PTSD.

“One of the men was in a horrible work accident,” Coleman said. “He had made suicide attempts. He couldn’t even leave his house. He was on full disability. With a service dog he was actually able to leave the house for the first time in years. That is huge. His world has just expanded. He still has PTSD, but the dog is a tool for overcoming his disability, like a cane for someone who’s blind.”

While Coleman readily acknowledges that emotional support animals can play a key role in the lives of many people with mental illness, he, like Gallagher, believes that it is important to make a clear distinction between animals that are trained as service animals and well-behaved pets that provide emotional support.

“They’re different breeds,” he said, laughing at his own pun. “Some of the support they provide may be similar, but the reality is that the work they do is really, really different. You can take a pet dog and put a vest on it, but 99 percent won’t have the right temperament to be a true service dog. If you think they do, you’d be dead wrong.”

Minnesota law now makes it illegal for someone who knows that the animal they brought into a store or restaurant is not a service animal if they pass it off as being a service animal. Source: Minnesota Department of Human Rights