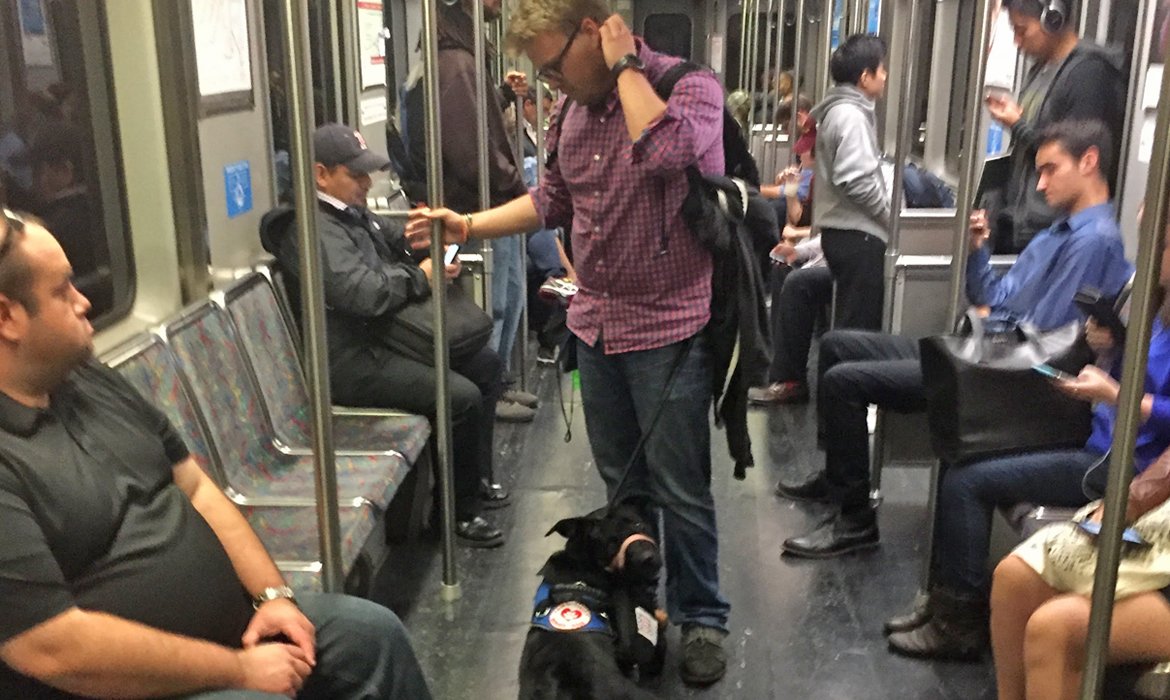 The federal, state, and city regulations about service dogs.

This page attempts to summarize all the various laws and regulations. The wonderful American Veterinary Medical Association has also put out a draft 16-page "white paper" that goes into more detail, if you're interested.

The Americans with Disabilities Act (ADA) is the main law governing Service Dogs, except on airplanes because “the Air Carrier Access Act is the Federal law that protects the rights of people with disabilities in air travel”.[1]

1 - The Americans with Disabilities Act (ADA):

The law says that a Service Dog must be trained specifically for a person with a disability. That means it can’t just be a general-purpose assistance dog, but rather it must be trained specifically for one person.The person who is getting the dog must have a disability that rises to a level that the Americans with Disabilities Act considers a disability. A good rule of thumb is that if a person cannot work, then they’re disabled. (This is not always the case, but it’s a good general rule to follow.)

The dog must be trained to do a “task.” The term is not strictly defined, but three of the most clear-cut tasks are helping lead a person who is blind across the street, alerting a person with severe diabetes that their blood sugar has dropped dangerously low, or picking up items for someone with limited mobility.

There are no limits to the size or breed of dog that may be used as a Service Dog. However, one may not have a service cat or any other animal (except for miniature horses).

If you live in the United States and have a disability, you benefit from the forward-thinking Americans with Disabilities Act. Most countries, unfortunately, do not have such broad protections. many only legally recognize service dogs for people who are blind. There are a few, however, who legally recognize alert dogs (for diabetes and epilepsy), mobility dogs (for pulling wheelchairs, picking up dropped items, turning on/off lights), and signal dogs (for the deaf), but very few recognize service dogs for autism or psychiatric disabilities such as Post Traumatic Stress Disorder. Restrictions. The rest of the law says (generally) that a Service Dog must be well behaved and must be leashed. Other requirements are that the dog is in control and that the dog is housebroken. These two points might seem obvious, but when you get into the issue of fake Service Dogs, these two elements can be helpful in demonstrating the difference between a real Service Dog and a fake one.

The law goes into where the dog and handler can go, which is defined as "where the public is normally allowed to go". This wording implies that the handler can bring the dog into businesses, nonprofits, churches, and even schools.

The law also goes into what a staff person can ask about the dog, which are two questions - one is to confirm that the dog is required because of a disability, and the other is to ask what task the dog performs.

The federal law does not get into whether there are exceptions for service dogs in training, so that is sometimes a gray area, depending on your state. A good rule of thumb is to follow the law that Minnesota passed in 2015 (256C.02 Public Accommodations), which states, "Any person training a dog to be a service dog shall have the right to be accompanied by a service dog... The service dog must be capable of being properly identified as from a recognized school for seeing eye, hearing ear, service, or guide dogs." The term "recognized school" can be interpreted being registered with the Secretary of State as a local nonprofit.

If you need the exact wording of the ADA law, it is here and the official memo describing the law is here.

Here are the federal memos defining the statutes about housing and service dogs, written in 2004, 2011, 2013, but basically, this housing law applies to renters, and it affirms that landlords have “obligations to make reasonable accommodations for assistance animals”.[3] In layman’s terms, this law affirms that someone with a disability can keep their Service Dog with them in a rented house or apartment, even if the landlord doesn’t allow pets there.

There are a lot of guidelines and rules about service dogs, so I’m going to start by making some broad generalizations and then get into the complexities, exceptions, and shades of gray. Note that some of these items are actual laws (generally federal laws) but others are just our guidelines and recommendations. Note, too, that I am not a lawyer, but rather, the following is my understanding of the applicable laws and regulations.

While service dogs are allowed in most places, the law says they aren’t allowed to block an aisle or go up onto seats. We also recommend that handlers don’t take their dogs to swimming pools because of possible cleanliness issues, to live performances because of the dog’s potential to disturb others, or to movies because the noise level and tight quarters are challenging for the dogs.

The vocabulary about dogs that help people is a little confusing, and many people (incorrectly) use the following terms interchangeably.

[3] “Subject, Service Animals and Assistance Animals for People with Disabilities in Housing and HUD-Funded Programs,” US Department of Housing and Urban Development, April 25, 2013.