Epilepsy is often co-morbid with Traumatic Brain Injury and many other conditions. The following is about how our service dogs help veterans with seizures.

In addition to the seizures, epilepsy affects lives in so many ways. For many, it's not just the seizures that cause suffering, it's also loneliness, frustration, or depression. A service dog won't cure your seizures. But you might be interested in the three ways it can help. 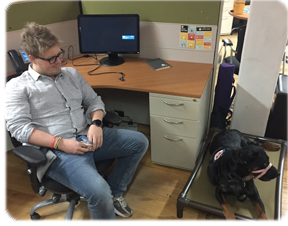 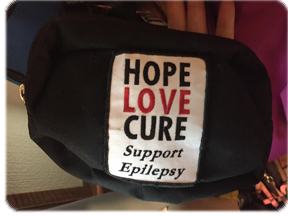 While a dog can smell seizures coming on (see article below) because they know so far in advance it can be difficult to reliably reward any behavior indicating that the seizure is coming on. There are a few service dog organizations who require handlers to go off their medication for months in order to have multiple seizures, and then they train the dog to alert to a cue (by using cotton balls infused with the saliva of the handler, which had been taken immediately after their seizure). We believe that the problems with this approach outweigh the benefits because every time someone has a seizure, they get permanent damage to their brain. While that approach certainly works in other organizations, for us, though, we believe that it is not worth it to ask handlers to go off their medication in an attempt to train the dog to alert. Thus, we focus on training the dog for seizure response, set up protocols to bond the dog to the handler, and then even if the dog doesn't alert on its own (hopefully it will, but it can't be promised), still, handlers report their quality of life improved.

All our dogs undergo behavioral analysis and training to determine their suitability for seizure assistance work. Our standardized selection criteria doesn't soley rely on breeds, but rather is used to select dogs that have qualities such as a calm disposition, responsiveness to humans, initiative, sensitivity to the handler, conﬁdence, ability to tolerate distractions and new situations, lack of hyperactivity, good attitude adaptability, crate livability, plus a complete veterinary evaluation.